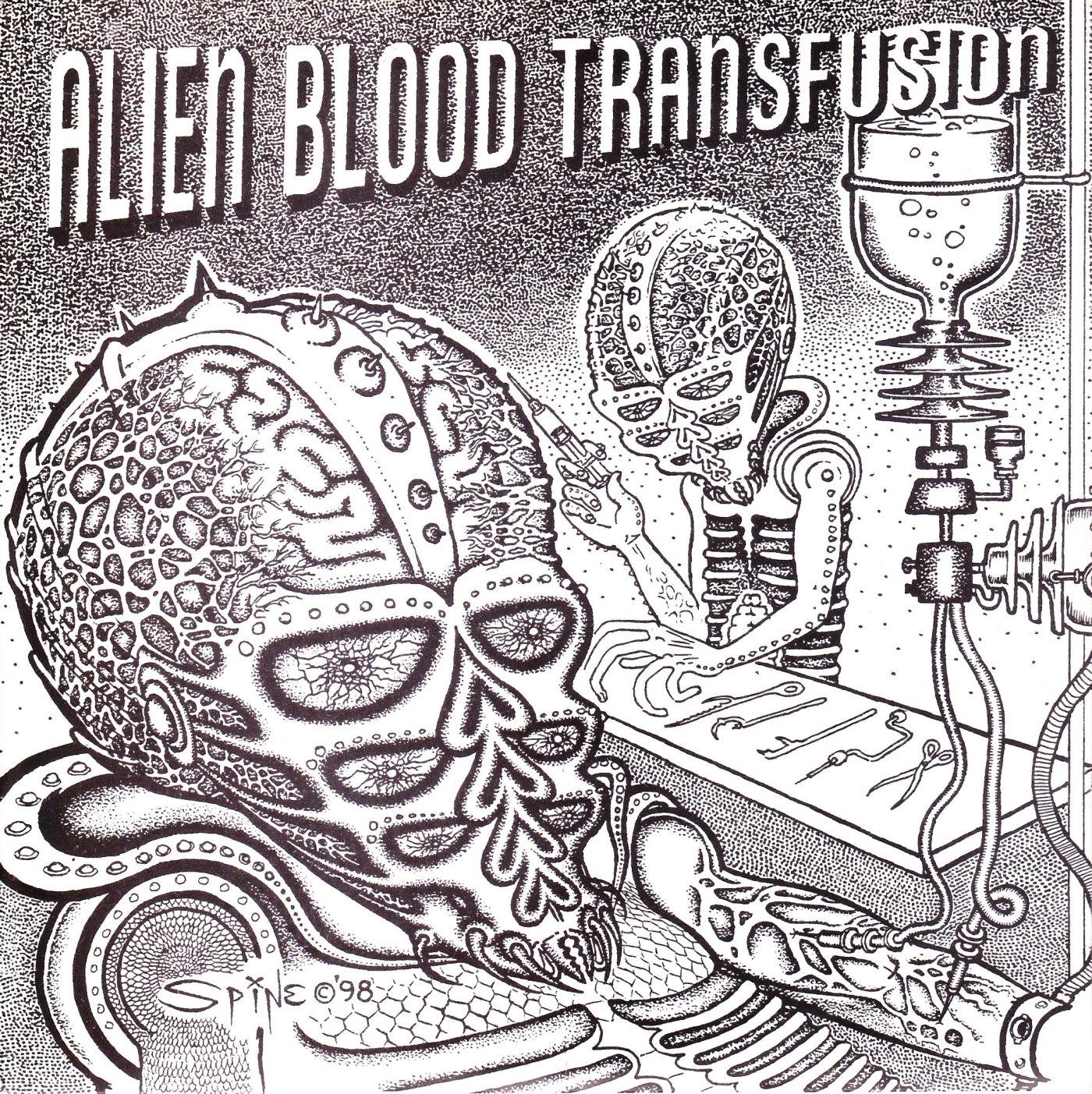 The side project of Massachusetts hardcore outfit Out Cold, Alien Blood Transfusion was the slightly scaled back, “Ramones-meets-GBH” garage punk outlet for members Mark Sheehan (guitar, vocals) and John Evicci (drums). Joined by Kevin Stevenson (bass) of The Shods, this 3-piece released The Many Faces of Ilsa 5” prior to this 1998 self-titled masterpiece of sci-fi garage punk obscurity.

Alien Blood Transfusion 7″ kicks off with a sample that can only be described as B-movie; a sort of mental picture painted before hitting the road with The Misadventures of Candy Mint. The instrumental punk rock romp is perhaps the slowest of the 4 songs on the album, but gets the ball rolling with Evicci’s stand-out drumming. Sheehan’s tightened vocals join up on following track Hot Red Negative and remain present throughout the rest of the album’s 6 minute 30 second run time.

The album’s B-side starts off at flying speeds with song Abducted before transitioning into Insect, its descending riffs reminiscent of Coffin Break’s grunge-styled punk records. Evicci and Stevenson’s simultaneously bouncing and pummeling rhythm section create the perfect backdrop for the garage rock guitar work of Sheehan.

Distanced from the worn-out ‘classics’ of yesteryear’s fringe culture, Alien Blood Transfusion’s sci-fi lyrical and visual aesthetics made for a refreshing take on b-horror in punk. In its obscurity, the album fit right alongside nights of pinball, skateboarding, and upstaging friends with the worst of trash and horror cinema (thank you, John Waters).

Learning the art of culturally curating one’s life may now be tinged by the ghosts of hipsters past, but finding Alien Blood Transfusion was the penultimate reward for wading through endless amounts of cheap 7” records every day after school. So the next time you’re looking through cheap records, ask yourself, ‘does this look cool?’ You may strike it rich (figuratively speaking).

For fans of: Misfits, New Bomb Turks, Man or Astro-Man?

Like Alien Blood Transfusion? Give these a listen: The Hellbillys, Hellacopters, Marginal Man